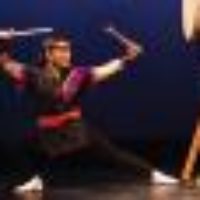 The art of kumidaiko—ensemble drumming with the taiko, a traditional Japanese drum—was developed in post-World War II Japan in the 1950’s.  Kumidaiko came to America in the late 1960’s and early 1970’s, entering through the Japanese American communities of San Francisco, Los Angeles, and San Jose.  These three communities, which contain the only remaining Japantowns in the U.S., were the birthplace of the first three kumidaiko groups: San Francisco Taiko Dojo, Kinnara of Los Angeles, and San Jose Taiko.

PJ Hirabayashi has played taiko for over 30 years and is a founding member of San Jose Taiko.  A sansei, or 3rd generation Japanese American, PJ says of performing taiko, “It allows me to express and understand my Japanese American identity, where I no longer feel marginal as an Asian American.  Taiko provides me the opportunity to be connected to Japantown, a symbiotic ‘give and take’ relationship—a true sense of community.”

PJ was a master artist in ACTA’s Apprenticeship Program in 2010 with apprentice Franco Imperial.  During their apprenticehsip, PJ guided Franco in improving his taiko techniques, form, and energy, while also developing a succession plan to pave Franco’s way in taking leadership at San Jose Taiko.  In addition to their lessons, Franco documented and deepened his understanding of the playing style developed by PJ and co-founder and spouse Roy Hirabayashi.  PJ and Franco worked together during the apprenticeship to articulate and codify San Jose Taiko’s distinctive style to ensure its legacy and articulate its aesthetic. 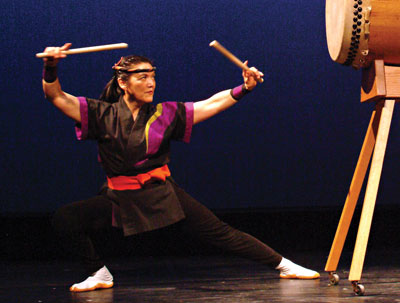