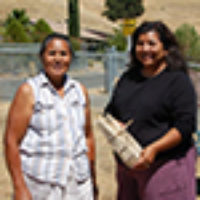 ACTA is deeply saddened to learn of Luwana Quitiquit’s passing in December of 2011.

“It’s really important to be able to focus on your basket.  If you aren’t in that positive space and you are working on a basket every little mistake that you make is pretty much an example of how you’re feeling.” — Elaine Quitiquit-Palmer, Apprentice

Pomo basketweaver Luwana Quitiquit taught her niece Elaine Quitiquit-Palmer to weave Pomo baby cradles. As a participant in ACTA’s Apprenticeship Program, Elaine learned to make two different types of Pomo baby cradles, a Lake County style and a Mendocino County style.  The Lake County cradles are rocking cradles so they are rounder, while the Mendocino County cradles are flatter in the back.  Both types can be tied on a mother’s back or made into a swing for an older child.  Luwana explained that people used to tie the cradles in a tree while they worked so that the baby could see the world from the same level as adults do.

The cradles are made from willow shoots that are woven together with cotton thread. Red willow bark adds design. Traditionally, the designed cradles were for boys while plain cradles were for girls, but now most people prefer the more colorful cradles. At the head of the cradle the weavers add a sturdy black walnut hoop and inside the cradle are hand woven ties that secure the child and keep them safe. If a baby fell or rolled while they were tied into the cradle the walnut hoop would protect them. Luwana usually also includes a little mattress inside for the baby, dies her thread to add color, and includes fringe and abalone shell for decoration. Before cotton thread became widely available, Pomo women would spin cordage out of dogbane fibers. They would use the cordage in their baby cradles as well as headdresses, dance skirts, and purses. Elaine and Luwana also visited museums to study the Pomo baby cradles and get inspiration for their own work.

Luwana became interested in learning basketweaving when she was a student at the University of California at Berkeley.  She would travel eighty miles to study with renowned Pomo basketweaver Mabel McKay.  As a student who was also raising a family, it was difficult for her to find time for weaving but she was determined to learn.  Luwana explained, “I took it upon myself to do it because in this day and age if you have no interest, you’re not going to learn.  Nobody’s going to come up to you and say, ‘You know I want you to learn how to make a Pomo basket.’ You have to be self-motivated and you have to seek the people because they’re not there anymore.  That’s why I do what I do to make it easier for people in my tribe to come to me.”

When Luwana retired and finished raising her family she decided to dedicate her life to teaching basketry. She has also started a native nursery where she cultivates native plants needed for weaving because these materials have become scarce in the region. Because there are few Pomo weavers left, Luwana explained that one of her main goals was to make sure that her students also learn to be instructors so that they can go out and teach. She teaches seven representatives from the seven Lake County Pomo tribes. These representatives return to their tribes and show what they have learned.

Elaine became interested in basketry as a student at Humboldt State University. She took a basketry class with renowned weaver Susan Burdick and learned to make Yurok style baskets. She also learned to make Miwok style coil baskets from Julia Parker at a California Indian Basketweaver’s gathering but she explained, ““It became clear to me that I needed to learn Pomo style for myself and for my family.”