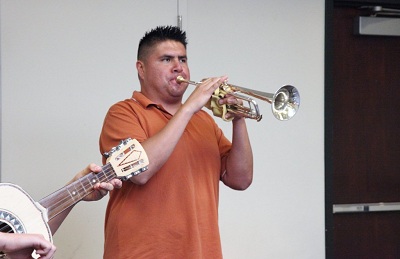 Living Cultures Grants, Apprenticeship, and Traditional Arts Development Programs met on a Sunday afternoon, along with ACTA staff and Frances Phillips of the Walter and Elise Haas Fund, for conversation and art-making.

We want to thank all the participants that attended, especially those that contributed to the art-sharing portion of the afternoon, and the Oakland Asian Cultural Center for their graciously providing a space for the gathering.  Wendeanne Ke’aka Stitt (Living Cultures Grants Program master artist working with the Academy of Hawaiian Arts) demonstrated the process of making kapa cloth, pounded from the bark of the wauke tree, used to make clothing articles—a Hawaiian tradition; Jenny Bawer Young and Holly Calica (Apprenticeship Program 2012) demonstrated and discussed Kalinga Laga backstrap weaving techniques and designs; and finally Juan Díaz and Estafania Hernández (Apprenticeship Program 2012) accompanied by Carla Díaz and Russell Rodríguez performed a mariachi version of the popular polka Jesusita en Chihuahua.  In addition to our participants that contributed to the art share, representatives from various other ensembles and traditional arts communities participated, which included members of the Arab Cultural Community Center, Calpulli Tonalehqueh (Azteca dance), San Francisco Theatre Flamenco, Bay Area Flamenco, Voice of Roma, Oakland Asian Cultural Center, and Diamano Coura West African Dance Company.

As a funder and advocate for the field, these gatherings provide ACTA a crucial lifeline to the experiences of culturally specific art-making.  We are reminded that there are cultural and historical concepts linking seemingly disparate traditions together, demonstrating a family of resemblance across cultures.  At this gathering, this was made evident through a discussion best described as a commitment to creating strong and healthy communities.  Concise articulations of why traditional arts and practice matter clearly illustrated different processes and understandings to maintaining well-being in diasporic communities within the United States.  Tamara Alvarado of Calpulli Tonalehqueh simply stated “we call it medicine,” referencing the dance, music, regalia, gathering, prayer, and interaction occurring within the community of Mexica (Aztec) tradition.

Focusing on the correlation between traditional arts and health led the gathering to various topics, such as the manner in which we practice and share ways of knowing within a cultural group as compared to what we present in the public space.  For instance, it is common for indigenous communities not to demonstrate ceremonial procedures that focus on natural elements, which can easily be misconstrued by unknowledgeable audience, as compared to presenting artisanal materials, song, and dance to provide new audiences more access to cultural ways of knowing.  Other ideas that emerged were how artists and cultural practitioners develop abilities to present political messages or communicate a political stance that is much more palatable than overbearing discourses presented by political representatives, underlying possible advocacy for cultural communities.  Calpulli Tonalequeh, for example, has led the May Day march in San Jose for the past several years.  Behind them are unions with placards or overtly political messages.  They feel their presence at the head of this march helps set a cultural tone, locating the political within a larger narrative of community and longevity.  During their presentation, Holly Calica and Jenny Bawer reminded us that indigenous people have experienced a trauma of colonization that has long transformed from “our true state of being… it brought us from a state of well-being to really a state of ill-health.”  The systems of colonization disrupted “the relationship with our place,” the natural context in which our communities emerged, illuminating that many cultural groups develop wonderful, beautiful practices and articles to offset the system in which create aggrieved communities.

Throughout the afternoon, contributions to these discussions were overwhelmingly supplied with examples by all those present of how dance, food, music, crafts, storytelling, ceremony, and so on, have provided a grounding for people to find health and practice health.  Naomi Diouf of Diamano Coura, for example, provided a story of how as a high school teacher she works with students that have been stigmatized as “mentally and physically challenged” or as children that “nobody can control.”  Diouf shares that once the music and dance starts in her class there is clearly “mental and spiritual health” as the “stigmatized” students find focus and begin to communicate.  She continues that when there are staged performance these children find solace within the “complexity of the stage… there is order,” they are able to participate in the choreographies and in the performance in general, where in other spaces of school and home they are uncontrollable.

The conversation itself promoted a special conviviality—a sharing of space, place and ideas that seemed to be well appreciated by those present.  The discussion also left much to ponder on how traditional arts promote communal well-being, but it undoubtedly began an important dialogue that will hopefully continue to manifest within the different groups and more importantly cross-culturally between communities.  We are hoping this will be a conversation ACTA can continue to develop along with the talented and knowledgeable artists, practitioners, and administrators throughout California.