Congratulations to beloved California artists Ofelia Esparza (Los Angeles) and Marion Coleman (Castro Valley) who were named Wednesday, June 20th, as recipients of the 2018 National Heritage Fellowship, an annual program of the National Endowment for the Arts, and our nation’s highest honor in the folk and traditional arts. These Fellowships highlight the “breadth and excellence of the artistic traditions found in communities all across the United States.” The addition of Ms. Esparza and Ms. Coleman mark a total of 45 Fellowship recipients from the state of California.

The Alliance for California Traditional Arts (ACTA) has proudly supported both Ofelia Esparza, a Chicana altarista, and Marion Coleman, an African-American story quilter, through programming, professional development, and funding opportunities for several years. ACTA also played a role in supporting the nomination of these artists. 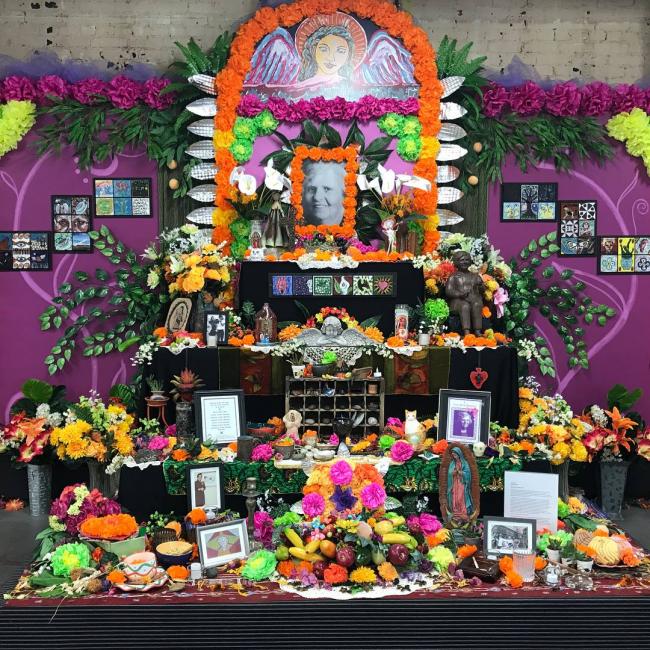 Ofelia Esparza, who has lived in East Los Angeles her entire life, explains, “My altars stem from the legacy left to me from beyond three generations of women-from my mother to my great-great mother.” Her work is informed by a deep spiritual belief in the traditional process, which pays homage and evokes memory of people, events, or places through multilevel structures embellished with photos, traditional foods, flowers, and handmade and found adornments. Ms. Esparza was a master artist in ACTA’s Apprenticeship Program in 2002 and 2012, with her daughters and apprentices Elena Esparza and Rosanna Esparza Ahrens, guiding them in the artistic and spiritual principles of altar building. She is currently an artist fellow with ACTA, giving altar-making workshops in the Building Healthy Communities Boyle Heights initiative and at the State Correctional Institution for Women. Ms. Esparza was recently commissioned to build an altar for the Natural History Museum of Los Angeles County as part of their new permanent exhibition, Becoming Los Angeles. She and and her daughter Rosanna run a gallery and open studio in Boyle Heights called Tonalli Studio. 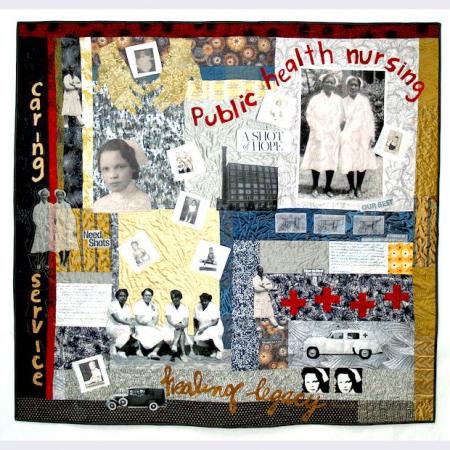 Memory, family stories, cultural change, and a world filled with color serve as inspiration for San Francisco Bay Area quilter Marion Coleman. She pieces together her family’s skilled heritage and the roots of African-American tradition together with modern mixed-media and digital art forms to transform her work into unique and relevant storytelling devices depicting a wide range of subjects, including African-American history and culture, social justice, and women and aging. Ms. Coleman was a master artist in ACTA’s Apprenticeship Program in 2015, working with apprentice Ora Clay, increasing and developing her skills in improvisational and narrative quilting. In 2010, Marion received support from ACTA’s Traditional Arts Development Program to research quilt history collections held at Michigan State University Museum. Ms. Coleman has completed public art commissions and received artist residencies throughout the Bay Area and beyond. She has served on the board of the African American Quilt Guild of Oakland, the African Advisory Council of the Oakland Museum, and the board of the Textile Arts Council of the deYoung Museum.

ACTA’s Executive Director, Amy Kitchener, says, “This award shares their inspiring histories and art on the national stage and also affirms the relevance, beauty, and creativity that emanates from African American cultures in the East Bay and from Chicano East L.A.”

“The 2018 NEA National Heritage Fellows have dedicated their lives to mastering these distinctive art forms and sharing them with new audiences both within their communities and nationwide,” said Mary Anne Carter, acting chairman for the National Endowment for the Arts. “We look forward to celebrating them and their incredible artistic accomplishments this fall.” The 2018 recipients will receive a $25,000 award and be honored in Washington, DC at an awards ceremony on September 26, 2018 and at a free concert on September 28, 2018. The concert will be streamed live at arts.gov.

WATCH a short documentary video about Marion’s incredible artistry and impact in celebration of her 2018 NEA National Heritage Fellowship award.