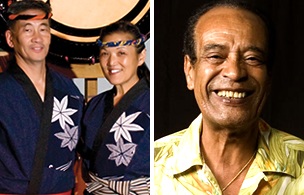 National Heritage Fellowship recipients, announced this month by the National Endowment for the Arts.  This award, which recognizes artists for their artistic excellence and efforts to conserve America’s cultures for future generations, is the nation’s highest honor in the folk and traditional arts.  Each of the nine recipients will receive a one-time award of $25,000.

The founders of San Jose Taiko, Roy and PJ Hirabayashi have helped to create a new Asian American art form by infusing the traditional rhythms of Japanese drumming with musical and cultural influences from around the world.

As post-World War II baby boomers and third-generation Japanese Americans growing up in the San Francisco Bay area, the Hirabayashis were looking for outlets to express their cultural identity, when they discovered taiko, a form of drumming.  This was the beginning of San Jose Taiko, created in the heart of San Jose Japantown in 1973.

When San Jose Taiko was founded, only a few taiko organizations existed in the United States; today, there are hundreds, with San Jose Taiko as one of the nation’s leaders.  As composers and performers, the Hirabayashis have maintained a respect for cultural tradition, while moving the taiko art form forward through innovation; collaboration; and outstanding performance, training, and education programs.

Visit the NEA’s website to read more about the Hirabayashis and view a video of them performing.

Growing up in Rio de Janeiro in the 1940s, Carlinhos de Oliveira (known today as Carlinhos Pandeiro de Ouro) was immersed in samba, a style of music with roots in both Africa and Portugal.  Its most famous expression is in the poor and working-class neighborhoods surrounding Rio, called favelas, which host performing associations known as samba schools.  These groups compete every year in Rio’s spectacular Carnaval parade, with thousands of dancers in feathered costumes and hundreds of drummers playing samba rhythms.

One drum that can perform all the rhythms of the samba is the pandeiro, Brazil’s national instrument.  Similar to the tambourine but played differently, the pandeiro is tunable and with the right technique, a skilled player can sound like a drum set.

Carlinhos took up the pandeiro at age seven, starting with one of his mother’s cake pans.  He practiced all the time and visited the favelas and Mangueira, in particular, one of the greatest samba schools. Carlinhos would join in during rehearsals, and he soon came to the attention of Mangueira’s legendary singer, Jamelão, who invited Carlinhos to become a performing member of Mangueira, a high honor.

Carlinhos’s pandeiro playing became so theatrical, with unprecedented juggling and stunts (known as malabarismo), that it set a new standard for pandeiro playing in Rio’s Carnaval parades.  Soon Carlinhos was performing professionally, working with every important musician and composer in Rio.

Carlinhos married an American singer in 1983, moved to Hawaii, and raised a family.  For the last three decades, he has led parades, performed with numerous American samba bands, and taught ‘classic’ Rio-style samba to thousands of students.  Today, Carlinhos lives in Los Angeles, performing nationally and teaching locally at the 18th Street Arts Center in Santa Monica.

Visit the NEA’s website to read more about Carlinhos and view a video of him performing.