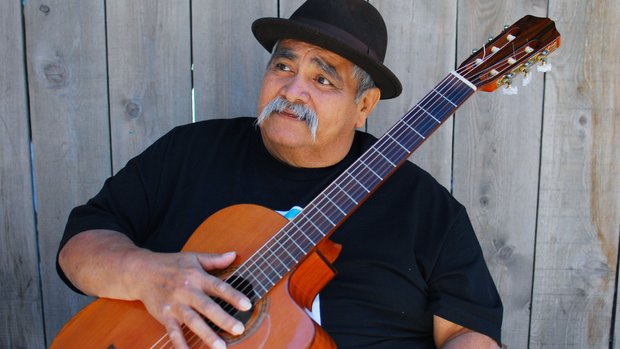 It is with great pleasure that we celebrate the recognition of one of our elders in Chicano traditions, Ramon “Chunky” Sanchez—no tan Viejo, more like a younger tio or an older cousin.  I had the honor to interact with Sanchez in 2004 while working on the recorded compilation, Rolas de Aztlán: Songs of the Chicano Movement (SFW CD 40516) put out by Smithsonian Folkway’s Recordings. Sanchez’ contribution of three recordings to this collection demonstrates his importance to this era and the diversity of his musical talent and song writing. Throughout the process of producing this project, we continually returned to Sanchez and his body of work for inspiration, ultimately deciding to use the title of his group’s (Los Alacranes Mojados) first LP, Rolas de Aztlán (Songs of Aztlán), as the title for the Smithsonian compilation. 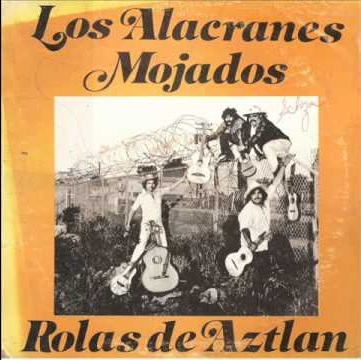 My relationship with Sanchez is not extensive, however, it is significant, for Sanchez not only represents the emergence of Chicano traditions in the United States but also signifies a genealogy of musicians and theater workers to which many younger Chicana/os pertain. His work as a musician, songwriter, storyteller, comedian, teatrista (Chicano theater worker), and activist has laid foundations for new cultural developments in Mexicano and Chicano communities throughout the United States.

The contributions by Sanchez to the cultural fabric of the US, particularly in the development of Chicano and Mexicano expressions, are vast. Born in Blythe, California, Sanchez began learning music, along with his brother and musical partner Ricardo Sanchez, from their mother and uncles. At an early age he began to develop his skills on the guitar and formulate abilities as a songwriter. Concurrently, Sanchez grew up as a farm worker, and was consciously aware of his social status as a cultural minority in the margins, as well as the historical lineage of this condition. Like many people that worked in the fields during the early 1960s, Sanchez became active in the farm workers struggles. When he was recruited into San Diego State University, he became further aware of conditions and issues with which the Chicano and Mexicano communities were dealing in the rural and urban settings. It was natural for Sanchez to utilize his musical talent to contribute to the activism that characterized the Farm Workers Movement and the Chicano Power Movement, to which he contributed immensely as an artist and an organizer. 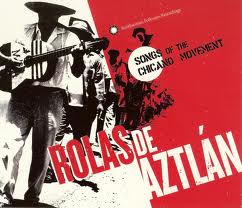 As a student at San Diego State University, Sanchez honed his ensemble skills, becoming a central member of the important musical group, La Rondalla Amerindia de Aztlán, which was led by another elder, Professor José Villarino. A charismatic front man, Sanchez became comfortable working as an actor joining the Teatro Mestizo that was affiliated with the Centro Cultural de la Raza in San Diego. As one of the musicians touring with the teatro he was introduced to many other theatrical musicians that included people like Agustín Lira, Danny Valdez, Eduardo Robledo, Enrique Ramirez, and Fernando Leyva. In 1977, the relationship with Leyva, of the Mexico City theater ensemble Los Mascarones, led to a historical recording project that featured Sanchez and his newly formed group Los Alacranes Mojados, called Levántate Campesino. This is an important endeavor because it is of the few transnational productions in which Mexicanos and Chicanos worked on together and has been documented.

Los Alacranes Mojados with Chunky Sanchez pioneered many of the techniques and practices pertaining to the cultural expression of Chicano movement music. Their recordings Rolas de Aztlán, Picando, In Good Company, Rising Souls, and Veracruzano demonstrate the polycultural manner in which Chicana/o musicians practice music. Layering together the influence of Mexican, Latin American, African American, labor songs, and US popular music, Sanchez contributed unique sounds and textures that can be identified as Chicano. In addition Sanchez continued to perform traditional forms of son jarocho, huapangos, boleros, rancheras, R&B, rock, and Latin dance music, illuminating an ability to oscillate between styles and genres with swing and sentiment. Sanchez’ original music represents a soundtrack to the Chicano experience in the United States. His original compositions such as “Chicano Park Samba,” “Caminando Por Las Calles,” “Guitarra Campesina” are imperative works, for they fill the gaps of documenting the socio-historical and political experiences of the Chicano and Mexicano communities. The music of Sanchez is a repository that sheds light upon hidden histories of our nation. Also important to understand is that his music is valuable simply because it is good.

The compositions Sanchez wrote and performed functioned as counter narratives, which questioned and challenged the dominant powers that marginalized community members and strategically directed them into the military, low-income housing, racist educational and healthcare institutions, and a second-class citizenship in general. Like many Latino cultural workers that include David Siqueiros, Rubén Blades, Mercedes Sosa, and others, he embodies a tradition of public art addressing socio-political issues of the time. Ramon “Chunky” Sanchez represents an enduring voice that provides an insight of how people of aggrieved communities are essential in the growth of our nation. In the current state of debate of immigrants and the constant stereotyping of people of color, it is necessary that we make our best effort to amplify the voices of our elders like Chunky Sanchez.

Visit the NEA’s website to learn more about Chunky Sanchez and hear two audio samples of his work.

Visit the NEA’s website to learn more about the National Heritage Fellows and the other 2013 honorees.