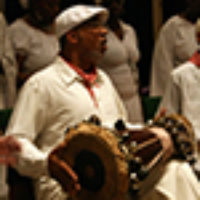 The batá is a sacred drum tradition originating among the Yoruba people of West Africa and brought to the New World during the slave trade era.  Female in nature, the three two-headed drums played by three men activate a sacred language that communicates with the spirit world of the Orisha (or deities).  The batá are central to the practice of the Lucumí tradition where many rituals cannot be done without them.

Tobaji Stewart has been a drummer for over fifty years, beginning his study of the batá in Oakland in 1972, with Marcus Gordon and Bill Summers.  Now Tobaji is among the country’s foremost teachers and practitioners in the art of constructing and playing the highly specialized and complex batá and is a source of instruction, information, and inspiration to Bay Area batá devotees and Lucumí practitioners.

Of his role as an Olu Batá, the title for a master batá drummer, Tobaji says, “For many years, I was the go-to guy when members of the community wanted a battery to play for a bembe [ceremony].  The members of the battery with the Apon (lead singer) run the ceremony.  They have to know the Iyania, the minimum greeting for the 27 major Orisha.  They open and close the ceremonies.  They call the Orisha.  They have to know the members of the community and what Ocha they are initiated to.  They have to know Oriki to call a reluctant Orisha.  But just as importantly in the larger sense, my job is to share what has been taught to me, to be a tool and a vehicle to help people open their eyes to the values inherent in the traditions of Africa, that we did more than what happened in slavery.”

As a master artist in ACTA’s Apprenticeship Program in 2016, Tobaji will work with his apprentice Davina Estrella Hinkle to further ground her skills and technique in the sung liturgy of the Yoruba tradition of West Africa.

Tobaji was a master artist in ACTA’s Apprenticeship Program in 2013, with his sons and apprentices Ade Ogun Ire Thomas-Stewart and Adisa Brian Stewart, sharing the cultural and performative significance of the sacred batá drum tradition.