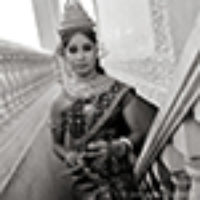 Sometimes when a people survive the greatest of tragedies, art and culture is the first thing they turn to in order to continue. Although 90 percent of all Cambodian classical artists perished between 1975 and 1979 after the fall of the Khmer Rouge, those who did survive wandered out from hiding, found one another, and formed “colonies” in order to revive their sacred traditions.

Sophiline Cheam, niece of ex-Minister of Culture, Cheng Phon, was twelve when she first learned to dance in such a colony in Kompong Thom, studying with a former royal palace dance master, Soth Sam On. Two years later she went to study with Soth and other master artists at the newly reassembled School of Fine Arts in Phnom Penh. Sophiline studied diligently and was among the first graduating class. She taught in the school for three years before marrying an American and immigrating to California. Sophiline Shapiro says, “Within the dance I found purpose, meaning, and beauty in an otherwise hopeless world. And within a few years, I was touring the globe.” In the United States she found many in the Cambodian community suffering from a variety of problems related to cultural dislocation. She began teaching dance almost from the moment she arrived in southern California. “Classical dance, as Cambodian culture’s most precious art form, represents another side of being Cambodian – the graceful, refined, beautiful side, the side that offers the community something to practice and point to with pride.”

Sophiline Cheam Shapiro served as a master artist in ACTA’s Apprenticeship Program in 200 with apprentice Socheata Heng. Socheata was one of a hundred young Cambodians who studied with Sophiline Shapiro in southern California. She distinguished herself as a specially dedicated and able student. On one occasion, Socheata replaced an injured professional dancer in Sophiline’s dance concert. She learned the dance at the dress rehearsal and performed well that evening. Her parents, who are also especially supportive, drove her thirty miles to her lessons in Los Angeles. In their apprenticeship, Socheata learned to refine her performance of the dances she knows, more of the classical dance repertory, costuming, make-up techniques, and stage presentation, as well as rituals and mythology associated with the dances.