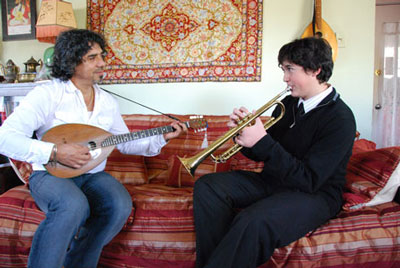 ACTA’s Apprenticeship Program in 2012, with apprentice Benji Bloom Rifati.  Their apprenticeship focused on training Benji to be an effective band leader, as well as increasing his confidence and skill as an instrumentalist.

Their 2012 apprenticeship built upon their participation in the Apprenticeship Program in 2010, during which Rumen taught Benji songs from the extensive Balkan Romani repertoire, in addition to Romani songs of Turkish, Bulgarian, Macedonian, Greek and Kosovar origins.  Rumen also focused on Benji’s development of ornamentation and improvisation styles in Romani trumpet.