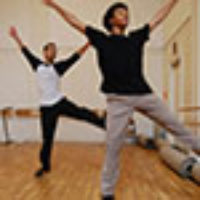 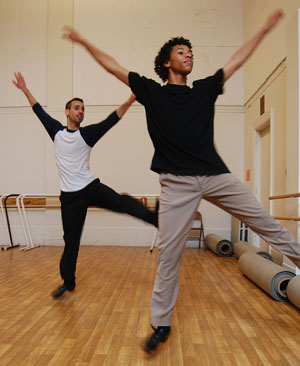 Born in the United States in the 19th century, tap dance emerged from the fusion of African American rhythm dance and Northern European step dance.  Additional influences include Spanish flamenco, and an amalgam of miscellaneous dance forms reflective of the “melting pot” nature of American culture.

Tap dancers are both dancer and percussive musician.  While the musical aspect of tap is historically rooted in African drum rhythm and the jigs and reels of Northern Europe, tap evolved hand-in-hand with American jazz music, and is practiced with a broad spectrum of musical accompaniment from classical to contemporary.  Tap is also performed acappella, or without accompaniment.

Tap flourished in teh United States in the first half of the 20th century, when it was the main performance dance of vaudeville, Broadway, and movie musicals.  In the last 20 years, artists such as Gregory Hines and Savion Glove have spawned a resurgence in the form and its relevance to contemporary American culture.

John Kloss began dancing when he was five-years old growing up in suburban Chicago.  A doctor was concerned about John’s “pigeon toes” and recommended that he start dancing, and he “took to tap dance like fish to water,” studying for a few years until other pursuits resulted in his quitting tap dance.  While recovering from a teenage knee injury and subsequent surgery, he saw a broadcast of Vincente Minnelli’s 1951 classic An American in Paris.  Re-inspired, he reconnected to his former teacher, Cary D’Amico, and “got serious.”  A dream of dancing with Los Angeles’ Jazz Tap Dance Ensemble brought him to California, which subsequently led him to San Francisco.  He has trained with a variety of tap masters including Savion Glover, Dianne Walker, Ted Levy, Robert L. Reed, Lane Alexander, Gregory Hines and Sam Weber.

In 2008, John was a master artist in ACTA’s Apprenticeship Program with apprentice Charles John Grant.  The apprenticeship’s focus included technical studies, traditional and new choreographies, improvisation, tap notation developed by Leon Collins and Stanley Kahn, and study of tap dance on film and in performances.