INCA, the Peruvian Music & Dance Ensemble, was founded in 1981 in Los Angeles, for the purpose of researching, preserving, and presenting Peru’s rich multi-cultural heritage of ethnic and folkloric music, songs, dance, and traditions.  INCA performs music and dances from the Andean region of Peru (Inca), from the central and northern coasts (Criollo, Hispanic), from the southern coast (Afro-Peruvian), and from the Peruvian Amazon jungle.  Since its onset, INCA has gained steadily in artistic excellence and in reputation as one of the west coast’s leading ethnic performing companies.

As a grantee of ACTA’s Living Cultures Grants Program in 2015 and 2016, INCA received support for a series of participatory performances for families and children at public library branches within Los Angeles County.

The following video features an excerpt of INCA’s performance at a local elementary school: 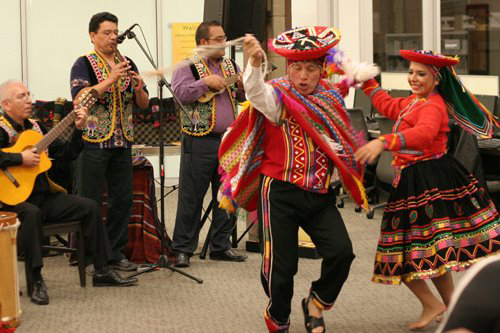