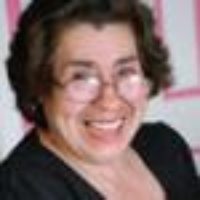 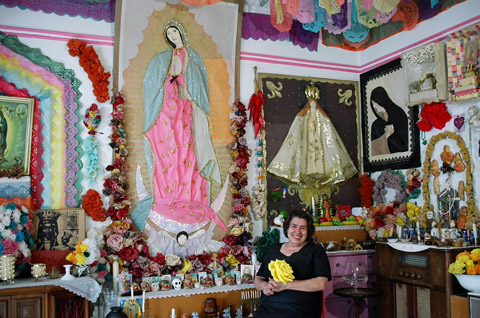 Herminia Albarrán Romero, a gifted papel picado (paper-cutting) artist from the village of San Francisco in Tlatlaya, Mexico, began learning her skills as a child from her mother.  Her family held a special position in the village as artists specializing in paper arts for Day of the Dead altars. As a young woman she honed these skills with study at Acatempa in Amatepel and amplified her personal knowledge of the various customs of folk art while working with the people of Mexico during her employment with Misiculturales. She has taught traditional clothing design and construction, papel picado, flores de papel, pan de muerto, ceramics, altars, and associated decorations all her life.  Today San Francisco, California, benefits from Herminia’s artistry.  Here she dedicates most of the year to preparing papel picado for her November altars, which are often commissioned by different museums and libraries, including the Oakland Museum, the Legion of Honor, and Mission Cultural Center for Latino Arts.  Herminia emphasizes that her altars demonstrate for the community that decorative paper art, which is inexpensive to complete, can be highly accessible and kept alive, but only through continual practice, demonstration, and outreach.  Continuing to evolve artistically and expressively, Herminia has recently been working on a CD collection of original music in the traditional folkloric style of Mexico.  This labor of love is a life-long dream of Herminia’s and draws on her original poetry and texts as well as her love of music and dance.

Colorful paper flowers, cut paper banners (papel picado), paper stars and streamers, and papier maché forms are all part of the traditional Mexican decorative arts utilized for holiday celebrations to adorn homes, altars, churches, and neighborhoods.  Expertise in preparing these objects includes knowing the correct colors and motifs, as well as the appropriate place and manner of display.  Papel picado, which forms the squares of bright colored tissue paper that hang as banners on many of Herminia’s altars and across her ceiling, requires careful folding and cutting.  For an exhibit, Herminia once folded and cut 684 different papers individually without repeating a design, surprising even herself.  The intricately designed paper cuttings and paper flowers are used in Mexico on special occasions such as quinceañera (coming out ceremony for 15-year-old girls), weddings, Cinco de Mayo, and especially Día de los Muertos (Day of the Dead).

In 2005, Herminia participated in ACTA’s Folk & Traditional Mentorship Initiative, serving as an artistic mentor to the Mission Cultural Center for Latino Arts.  Herminia offered workshops about the art and traditions of Día de los Muertos, teaching participants how to create a traditional altar, including papel picado, paper flowers, and preparation of traditional altar foods such as pan de muertos (bread of the dead), mole (a Mexican sauce), and atole (a Mexican breakfast drink).

Herminia participated in ACTA’s Apprenticeship Program in 2001 with apprentice Alicia Sheppeck-Zepeda.  During their apprenticeship, Herminia and Alicia worked throughout the year on improving Alicia’s papel picado skills.  Their apprenticeship culminated in the installation of an ofrenda (altar) at the Mission Cultural Center for Latino Arts.

The National Endowment for the Arts National Fellowships Awards is a way of honoring American folk artists for their contributions to our national cultural mosaic. This is the highest national award given to folk artists.

Herminia has offered workshops, courses, apprenticeships and demonstrations in a variety of traditional arts since the 1980s. Subject matter includes, but is not limited to, papel picado, traditional and ceremonial foods, and the design and creation of traditional folkloric clothing.

Recent demonstrations and workshops include:

University of California at Davis, demonstration and workshop of paper flowers,
Davis, CA, 2004 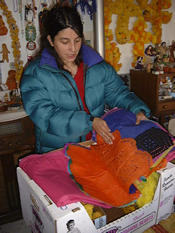