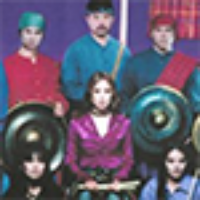 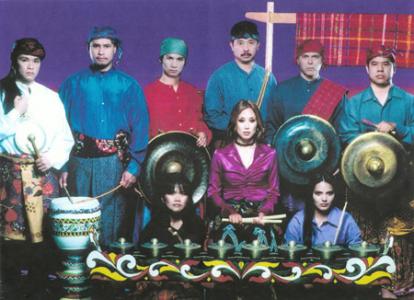 Kulintang music of the Muslim communities of the Southern Philippines is traditionally performed at such important celebrations as weddings, pageants, and spiritual healing ceremonies.  The kulintang instrument itself, a row of eight tuned kettle gongs, is the heart of the ensemble.  This ancient gong/drum ensemble music is passed on through oral tradition as each player memorizes hundreds of melodies and rhythms on this and many other instruments and learns to improvise melodies inspired by the experience of the musician and the beauty of the surroundings.  Mastery of kulintang music is difficult and occurs only after many years of practice and dedication by the musician.  Even in the villages of Maguindanao, Maranao, and Mindanao, in the Southern Philippines, the tradition is becoming more rare as fewer young musicians take up the complex and intricate musical form.  Here in the United States, a musician often finds even greater obstacles to pursuing kulintang music.

Eleanor Academia began studying kulintang music in 1980 after years as a musician of other forms.  She has studied with master teachers both in the Philippines and the United States and has been given their permission to teach and present the tradition.  Toward the goal of presenting, preserving, and promoting kulintang music, Eleanor has established the World Kulintang Institute, which presents educational and cultural programs throughout the Los Angeles area.  Performances by her ensemble keep audiences in touch with the melodies, rhythms, and counterpoint of the music.  Eleanor is aware of the response of other Filipinos to her efforts to keep kulintang alive in the community.  She says, “I am repeatedly thanked by so many people from my cultural community that it means so much to them to be able to see someone from their own community have the courage to devote all this time, effort and years of study to master this tradition and bring it back into the community as I have done so over the years through my work.  It means even more to them because I am American-born, yet was serious enough to devote myself to learning this tradition with integrity… I am easily accessible to them and they are appreciative they can have access to this rare and unique tradition through me.”

In 2001, Eleanor was a master artist in ACTA’s Apprenticeship Program with apprentice Asunción Ojeda, a classically trained musician who has studied and played with Eleanor at the World Kulintang Institute.  Asunción plays all the instruments of the ensemble with great skill; their apprenticeship focused on an in-depth study of the Yakan tradition of kulintang playing.  Intensive immersion in this part of the tradition allowed her to accomplish a much more refined and polished technical facitility on all the ensemble instruments in each of the Yakan, Maguindanao, and Maranao traditions of kulintang.  Like her teacher, Asunción plans to dedicate her life to studying and performing the ancient musical form.