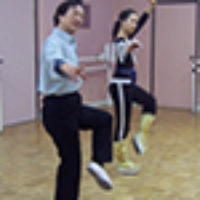 David Chen is a former choreographer and dance instructor of the Shanghai Opera and Dance Theatre. In his forty-year dance career, he performed numerous dances, as well as choreographed over thirty dances including such notable pieces as “Pantheon of Chinese Gods”, “Heroine Hua Mulan”, “Armor of the King” and “Peach-Flower Fan”. He also taught dances at the Shanghai Dance Academy, Shanghai Dance Theatre and many other national dance troupes. He is well known in China for his mastery of Chinese classical and folk forms and is renowned for his intense teaching techniques. At a young age, Mr. Chen also studied martial arts under Shao-Lin grand Master Lu Zhenduo. He practices and teachers martial arts and is famous for his swordshipman. In 1984, in conjunction with a computer engineer, he led a group in the study of “The System of Computerized Dance Language”. The group did pioneering work on “The Art of Dance information”, “The Art of Dance Language” and engineered the computerization of dance information. He is also a former member of the editorial staff of the Shanghai Chapter of the “Chinese National and Folk Dance Collective”.

Mr. Chen came to the United States is 1987 and was an assistant instructor at the American Conservatory Theatre, helping in “Marco Millions” and other plays that involved Chinese culture. He was also a dance instructor at the “Chung Ngai Dance Troupe” and the “Chinese Folk Dance Association”. In 1991 he was Artistic Director of the “Stars Performing Arts Company of San Jose”. In 1992, he started “David’s Dance Workshop”, served as the Vice President of the “Chinese American Artists Association”, and co-founded “Bridge and Gate Productions” with Dr. Christina Yao. From 1991 to 1995 he helped Alumni Association of University of Taiwan by directing a number of Chinese dramas. In June 1995, he founded the Academy of Chinese Performing Arts. In 2002, Mr. Chen founded the “Bridge and Gate International Cultural Foundation” with friends as the President.