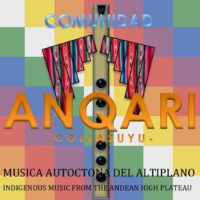 Formed in 2012 by artists in the Bay Area with different backgrounds in Andean music and dance, Comunidad Anqari focuses on the instruction, practice, and promotion of traditional and understudied dance and music of the Kollao Altiplano, a culturally rich region in the heart of the Andes mountains. A group of musicians dedicated to the performance of traditional music and dances, Comunidad Anqari is named after the Aymara deity of the wind. The name is reflective on the collective’s repertoire which is played upon indigenous wind instruments and corresponds to the seasons and festivals during which the repertoire is played.  Among its accomplishments, in 2013 Comunidad Anqari qualified for the San Francisco Ethnic Dance Festival and in 2014 and 2015, respectively, it won first place in the folkloric category and the Grand Prize at the San Francisco Carnaval parade. The organization has also performed at various cultural centers and community events, including at La Peña Cultural Center in Berkeley, Bayview Opera house, and the annual Watsonville Peace and Unity March; sharing in each their ancestral art. In addition, Comunidad Anqari provides a cultural home and community for a diversity of people in the Bay Area who share a love of Andean music. Current members include artists from Peru, Bolivia, Chile, Argentina, Mexico, El Salvador, and the USA. Every Sunday, they get together to practice and share these traditions. Some of its members come to Oakland from as far away as Sunnyvale and Antioch just to spend a couple hours in the practice. The organization believes more people in the Bay Area will benefit from connecting to these cultural traditions.

Played on the siku, or traditional pan flute, the Andean music style of Sikuris is played by an ensemble of 20 or more musicians called a tropa. Musicians must play in pairs to create a complete melody, with each musician playing one of the siku’s two rows of tubes. Tropas perform during agricultural, religious, and other traditional community celebrations, and reflect the Andean values of reciprocity, collectivity, equality, inclusiveness, and connection with nature. In 2021, a grant from ACTA’s Living Cultures Grant Program will support Comunidad Anquari in establishing a Sikuris tropa in the San Francisco Bay Area. Grants funds will support a series of virtual classes and workshops to teach and practice Sikuris, as well as the purchase of instruments.

In 2020 Comunidad Anqari received a Living Cultures Grant from ACTA to realize their Building Community Through Andean Music project. This project will provide education and training in traditional music and Andean cultures over the course of six months to people with Andean ancestry as well as others in the community. The goal is to train 25 musicians and culminate the training in a performance at the Inti Raymy (Andean New Year festival). The process of learning and growth will inspire the participants and the community to continue with the conservation and revitalization of Andean traditions, but particularly the legacies of the Kallawaya people. The Kallawaya are from an area of Bolivia near the Peruvian border. They are well-respected as healers and keepers of ancient knowledge in the Andes. Their philosophy emphasizes the connections between Pachamama (the Earth), healing, and music. For this reason, their music, the Khantu, is played at important festivals and ceremonies to connect with Pachamama and promote healing communities.

A Khantu ensemble usually consists of 24 members playing double-row panpipes (called phukuna or sikus), with some simultaneously playing the drums (bombo or wankara). A final member plays a large triangle called the ch’inisku. The music is performed outdoors and other people attending the festival are encouraged to dance along. The traditions of the Kallawaya are significant to Andean communities in the Bay Area for several reasons. First of all, it is important for those that are far from their ancestral homelands to preserve their culture as well as to share it with broader communities. Members of Comunidad Anqari also find that the wisdom inherent in these endangered traditions help them heal from and cope with the chaos of the city, intergenerational traumas, and the challenges of the modern world.