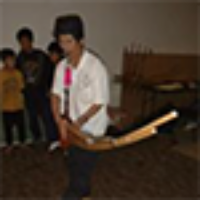 Some individuals in immigrant communities struggle to keep their traditions from disappearing when they move to a new land.  Cha Tou Xiong, a Hmong elder in Fresno, is such a man — one who is committed to keeping the art of making and playing the qeej (pronounced gheng) alive.  The mouth organ called qeej is an emblematic instrument for the Hmong.  At funerals, a musician plays melodies that serve to guide the spirit of the deceased on his journey to the next world.  The musical notes he plays convey literal meanings, because the music imitates the tones of Hmong language.  The instrument consists of six bamboo tubes, which are curved and set into a wooden wind chest.  Brass reeds are placed internally to which resonate when air passes through.  Bark and leather-like bindings secure the pipes and bind the two portions of the wind chest together.

Cha Tou Xiong began playing the qeej at age 13 in Laos, now more than sixty years later; he continues his important ritual role as a musician during funerals, which bring him great respect in his community.  In Laos he made his living, along with family farming, by making and repairing these instruments.  One instrument cost a significant sum, one or two silver bars in Hmong currency (an average bride price of four silver bars provides a comparison).  When Cha Tou lived at the Nam Yao refugee camp in Thailand, he made many instruments, including the one he plays today.  Getting all the right materials was difficult at that time, which meant making resourceful substitutions, such as using x-ray film in place of a the traditional tree-bark which hardens to a rubber like binding, to hold the instrument together.  As an elder today, he has attained the status of a master, which is clear from the demand for his services in and around California’s Central Valley.

In 2001, Cha Tou was a master artist in ACTA’s Apprenticeship Program with Vungping Yang, the son of Cha Tou’s cousin.  Vungping started learning to play traditional wind instruments from the age of 5.  Since childhood he has enjoyed both making and playing many types of instruments ranging from “pan pipes” made from Papaya stalks to his two stringed violin, the drajntxhe (pronounced da-chay).  Since coming to the US in 1979, he has continued to pursue learning traditional music from other Hmong Americans. He performs publicly, both inside and outside his community and is a well-loved singer at occasions like Hmong New Year.  He explains, “Since Hmong didn’t have schools as part of our culture, knowing how to make and play these instruments is considered as a very high level of education.”  His grandfather an expert qeej-maker in Laos, and Vungping hopes to achieve the same level some day. 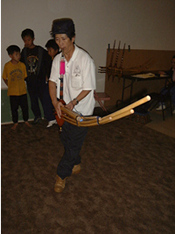