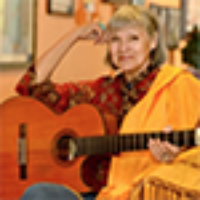 In the 1930’s-1950’s the late Luis and Carmen Moreno were known as El Dueto de los Moreno.  They toured the Southwest, accompanying themselves on guitars, sang on the radio, and recorded albums.  Luis wrote over 350 rancheras (country songs), many of them still being recorded in cover versions today.  Sabe Dios (aka, Que Sacrificio), for example, was recorded by Lucha Reyes and Banda Maguey and has also been included in Mexican film soundtracks.

In the midst of touring and recording, they gave birth to a daughter, Carmencristina Moreno.  She was raised in East Los Angeles and Fresno, surrounded by the Mexican music of her parents and all the great Mexican musicians and singers of that era.  Carmencristina began singing professionally when she was 11 years old.  Though she loves a wide range of American popular music, Carmencristina chose to follow in her parents footsteps by becoming an entertainer and recording artist performing, interpreting, and composing Mexican music.  Her recordings include Si Se Puede, a fundraiser for the United Farm Workers, and her first all-English CD, Train From Tenochtitlan.

In 2000, Carmencristina was a master artist in the inaugural round of ACTA’s Apprenticeship Program, with apprentice Melinda Salcido.  Melinda also also grew up surrounded by Mexican music.  Her mother, Imelda, dreamed of a singing career for herself and was delighted when Melinda showed a natural talent.  Melinda was encouraged to sing first at family gatherings, then public festivals and concerts, and eventually on Fresno area radio and television.  She learned to play piano, guitar, vihuela, and accordion.  At Roosevelt High School in Fresno, Melinda joined and co-managed Mariachi Sol Naciente.  She has had opportunities to sing with Mariachi Cobre, Mariachi Imperial de Mexico, Mariachi Vargas, and Mariachi Los Camperos.  During her apprenticeship with Carmencristina, Melinda concentrated on learning the style and repertoire that Carmencristina learrned from her parents.