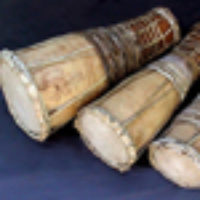 The batá are two-headed, hourglass-shaped talking drums from the Yoruba people of Nigeria.  The tones of the drums recreate language.  The batá were transplanted to Cuba and adapted there by enslaved Africans during the colonial era.  There are three different sized drums in the batá set.  The largest and lead drum is called the iyá (mother).  The middle-sized drum is called the itolele (the one that follows).  The smallest drum is called the okonkolo (the stutterer).  The batá provide the music used to praise and “call down” the spirits of the Afrocuban religion called Santería.  From Cuba the tradition has spread around the world, especially to Puerto Rico, Miami, New York, and California.

To become a batá drummer requires years of dedicated apprenticeship.  Like classical music, batá drumming has order, balance, and restraint, while conforming to an established and elaborated art form of historical significance, felt to be the authentic, authoritative in expressing the core values of Yoruba derived culture.  In addition to performing rhythms, master batá drummers need to know how to make and maintain the drums, including repair and ritual care.  California is one of the places outside of Cuba where this tradition is deeply rooted.

Carlos Aldama is omo Añá (sworn to the drum, literally son of the Spirit of Sound) and a priest of Changó in the Santería religion.  Having played the batá since 1955 in his hometown of Havana, Cuba, Carlos is a founding member of Conjunto Folklórico Nacional de Cuba and studied under its original musical director Jesus Pérez, eventually serving as musical director for fifteen years after Pérez’ death.  He has worked with the National Symphony of Cuba, playwright Roberto Blanco, and Karl Marx Theatre director Alex Valdez, and has played with Adalberto Alvarez y su Son, Lazaro Ros and Olorún, and Gonzalo Rubalcaba.

Of the batá Carlos says, “The drum is my life.  Through this art form I raised my family, traveled the world, and even became a resident of the United States of America.  The drum has been everything to me.  I see in the drum the continuity of life.  That’s why it is so important for me to teach.”

Carlos participated in ACTA’s Apprenticeship Program in 2009, working with apprentice Umi Vaughn.  Their apprenticeship focused on all three drums required to play batá; songs, dances, and folktales associated with various drum rhythms; and mechanic and ritual maintenance of the drums. 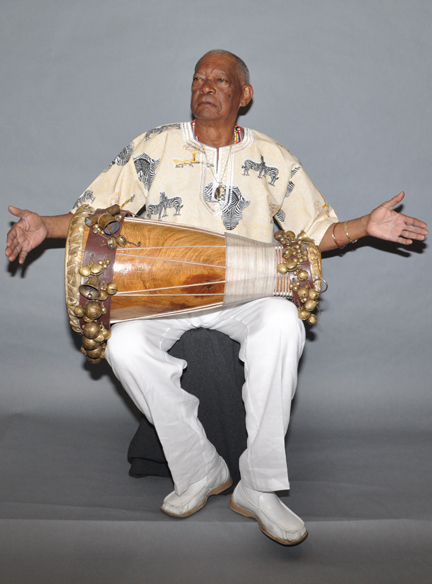