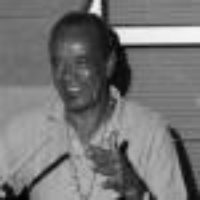 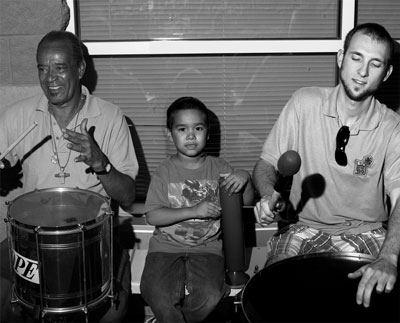 The pandeiro is a a small framed drum with jingles played in many Brazilian musical forms including samba, choro, coco and capoeira music.  Unlike a tambourine, a pandeiro drum head can be tuned, with cupped metal jingles, and is often played with swift, complex rhythms.

Carlinhos de Oliveira, aka Carlinhos Pandeiro de Ouro, began playing the pandeiro when he was seven years old in Rio de Janeiro, where he was born.  He was self-taught until he met Edimar “Dimas” Lorenso, who instructed him on the tamborim, a small high pitched hand drum played to offset the pandeiro rhythms, as well as the pandeiro.  Carlinhos is a master of all the instruments of the samba school, but is especially dedicated to the pandeiro.  In 1966 he won the title “Pandeiro de Ouro” and received recognition as Brazil’s best pandeiro musician.

Carlinhos participated in ACTA’s Apprenticeship Program in 2010 with apprentice Simon Carroll.  During the apprenticeship, Carlinhos taught Simon technical skills and numerous pandeiro rhythms,  history, and songs, in addition to pandeiro juggling, or malabarismo, an art form developed by Carlinhos during his career spanning over fifty years.