The author, Dr. Khampha Thephavong, is a committed member of the Laotian community in the Fresno area.  As a medical doctor at the Veterans Affairs Hospital, she provides much-needed service as an urgent care physician, especially offering cultural competency for the larger Laotian community in Fresno.  She has recently opened her own private practice that will incorporate alternative medicine (herbal practice, chiropractic, and acupuncture) in addition to western medicine.  In addition to her medical background, Khampha has personal interests in learning, maintaining, and keeping vibrant the traditional practices of Laos.  She has invested invaluable time to the organization, The Laotian-American Community in Fresno, as the Executive Director (a volunteer position).  This organization provides traditional dance and Laos literacy courses, both of which focus on youth development.  ACTA on various occasions have had the honor to work with Khampha, her mother, Leanne Mounvongkham, and other members of their family, all of whom have shared wonderful knowledge of the traditional culture of Laos.  Khampha is a current apprentice to her mother as part of ACTA’s Apprenticeship Program, being mentored in the foodways of Northern Laos. 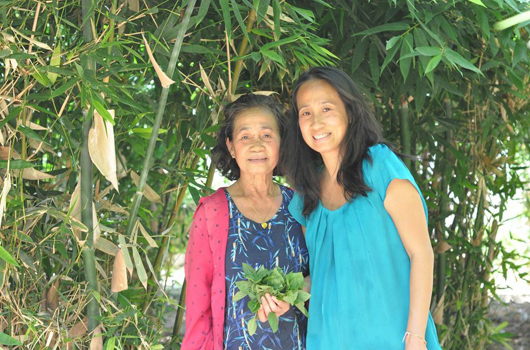 My mother was the second child in a family of five children.  Like most villagers, she lived in a close community where families cooked and ate together while helping each other raise their children.  By having exposure to so many women throughout her childhood, my mom inherited many special cooking skills and recipes, which she carries with her today.  When she was eight years old, my mom also learned how to weave traditional Lao skirts, which we call the shin. Lao skirt weaving is taught to girls, and is one of the major sources of income that people have generated for many generations, up to the present time.  The skirts are hand-woven of beautiful silks taken from silk worms that many families raised themselves.  When the skirts are completed, merchants go from village to village to buy and take them to the markets in big cities such as Vientiane, the capital.y mom, Leanne Mounvongkham, was born in a small village of Sam Neua located in the remote Northeastern part of Laos.  It is a rural village surrounded by treacherous terrains and mountains.  Outside influences from China, Vietnam, Thailand, and the rest of the world do not exist.  Thus, a strong maintenance of culture and traditions of Sam Neua remains intact within her.

My mom would often tell us stories about what it was like growing up in those days, in a small village full of love and camaraderie.  She shared everyday memories like: when the children woke up in the morning, they would start off the day by feeding their chickens, ducks, and pigs that they were raising.  Most boys would go with their fathers or grandfathers to visit the traps for birds, fishes, and wild animals that they had set up the day before.  After feeding the animals, the girls would jump onto the weaving apparatuses and begin weaving the shin together.  When noon and dusk approached, the girls and women would gather and prepare meals for everyone.

When she was eighteen years old, my mom migrated to Vientiane, the capital of Laos, which is situated in the central region, in order to escape a civil war. Three years later, she married my father, who was also from the northern part of Laos.  My father was sent to Vientiane when he was eighteen years old by his father,  to attend school in this big city.  By the time my parents met, my father was twenty-four years old and a had graduated with a degree in survey engineering.  My parents had a total of four children, and together we lived with our paternal grandparents in Vientiane, Laos.  It is a tradition of the Northern Lao people for the parents to live with the eldest son’s family.

My mom discovered that the cuisine in the capital was very different than what she was accustomed to.  Most of the dishes utilized modern, processed ingredients such as sugar, soy, fish, and oyster sauces.  Curry, tamarind, ginger, citrus leaves, and coconut milk are also common ingredients used in the capital. While living in Vientiane, my mom continued to expand her knowledge by learning new recipes and perfecting the art of cooking.  Many of the popular dishes of Central Laos includes Kao Poon (curry noodle soup), Laab (meat salad), Ghang (various type of soup) and Koua (stir-fry, which my mom has perfected as her masterpiece recipe).

In 1980, when I was only eight years old, my family (including my parents, siblings, grandparents, and me) emigrated to the United States to escape prosecution from the Communist officials.  Since my grandfather and father had served in the army of the Neutralist party who was an ally to the United States, they were sought after by the Communists.  To avoid persecution, our family escaped in hope of finding sanctuary in Thailand.  Fortunately, when we arrived in Thailand, we discovered that we could apply for permanent residency in the United States.  Thus, in October of 1980, we arrived in the United States and settled in Huntington Beach, California.  After living there for a year and a half, our family moved to Fresno, California, where we could make a living working at the farms.

Initially, when we arrived in the United States, finding produce and ingredients to cook authentic Lao food was difficult.  We were able to find a few herbs and spices such as pepper, cilantro, and lemongrass.  My mom improvised as much as she could but the food didn’t taste the same.  After a few years, we noticed that more and more herbs and spices from the old country became available. Also, people were now able to return to Laos to visit and on their way back they would bring seeds and dried products that could be shared in the United States. My grandparents and mom love to garden, and soon they were able to grow many of the exotic vegetables, herbs, and spices that are found in Laos. Therefore, authentic cooking became much more appealing after the essential ingredients were accessible. 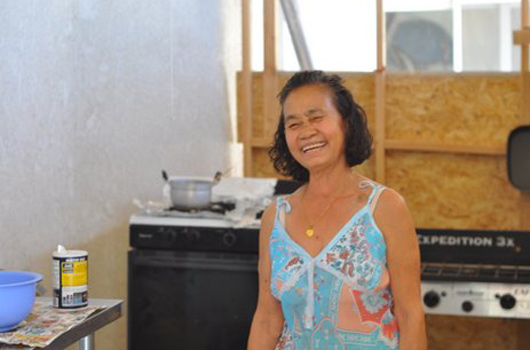 Being Lao, our culture is heavily celebrated through food and festivals.  Almost every month, there is a festival and as families, neighbors, and relatives, we gather and cook food to celebrate.  Throughout the years, my mom maintained the knowledge and traditions of cooking authentic food that is unique to Northern Lao.  She cooks various dishes that very few people have the recipes or skills to prepare.  As a result, my mom frequently gets special invitations to coordinate food preparations for the many community events that we have in Fresno.

I was exposed to Lao Northern cooking by helping my mom with food preparation at an early age.  I would wash and chop herbs and vegetables while she tackled the more challenging steps of the cooking process.  While cooking, my mom would share stories of her childhood and upbringing.  Living in Sam Neua, “Food and vegetables were plentiful,” said my mom.  People didn’t have to grow much of anything because everything they needed grew wild, and the meat they ate such as birds, frogs, river critters, rabbits, squirrels, and pheasants were plentiful.  The streams of every river were clean and clear.  They weren’t infested with toxic chemicals like in the big cities.  Many of the dishes that are unique to the Northern Lao people are made of mostly vegetables, including many different leaves and flower blossoms from edible trees and plants. Mushrooms and bamboo shoots are also found in many of the dishes.

My mom chose to teach me Northern Lao cooking because, out of her four children, I was the one who has the most love for traditional foods, while my siblings prefer more modern food such as the cuisine from Vientiane.  Growing up, I would always request that my mom cook food that were dishes from the North.  Since I love to eat, I was always around the kitchen sampling the food that my mom was making.  As a result, my mom encouraged me to learn how to cook Northern Lao food on my own so that I can cook for myself whenever I want to eat.

Some of my favorite dishes of Northern Lao origin include:

Naap — pieces of chicken, birds, or pork chopped up into quarter sizes and mixed in a seasoning of garlic, chili, salt, and a blend of specialty herbs for aroma.  The mixture is then wrapped with banana leaves and roasted over a low, smoldering fire.

Au Laam — a stew consisting of smoked beef, tendons, and beef skins that are sun-dried to give a crispy texture, immersed in a simmering broth of Asian eggplants, wood mushroom, garlic, dill weed, basil, and sweet pepper.

Jel (Hot Sauce) — a sauce base can be made from tomatoes, dried pickled vegetable, sour bamboo or mushrooms, mixed in grilled hot pepper and garlic; these are put into a mortar and blended together with a pestle.  After it is fully mixed, a sprinkle of fresh cilantro and onion leaves are added.  Jel is served with every meal. 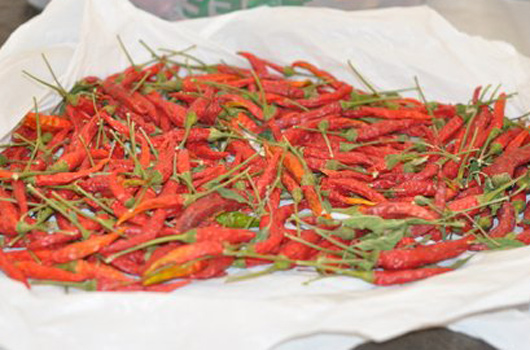 These dishes are well known to the Northern Lao people, but only a handful of people in the United States have the recipes or know how to cook them.  After migrating away from the North in the late 1940s, many people have lost the knowledge and skills to cook these traditional foods.  Living in different places with exposure to new ingredients and cuisines forces most people to adapt and they begin eating food that is more accessible to them.  Since my mom’s passion is food and cooking, she worked to maintain and keep her rare knowledge and skills with her all these years, so that her children and family can enjoy the food from her childhood village.

My mother is now retired and has more time than ever to devote to cooking. Currently, my mom has ½ an acre of bamboo plants that she nurtures, in addition to two big greenhouses where she plants various herbs and ingredients that she uses for cooking.  Anytime she cooks, she doesn’t have to run to the grocery store because everything she needs is right in her backyard!

As a family we are very thankful to be able to maintain the traditional food preparations that we grew up with.  Not only is it a significant part of our heritage, but the type of dishes and ingredients utilized in Northern Lao cooking are extremely healthy and delicious.  We are proud to be able to share this unique food with the rest of our community during special gatherings and celebrations.  Hopefully, someday, we can share them with larger communities.