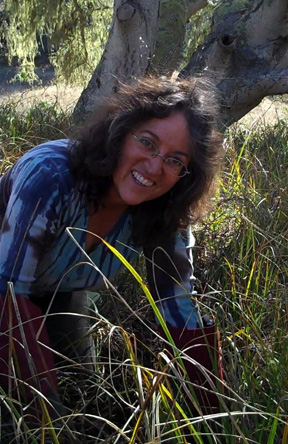 Hi! This is Linda again and this time I’d like to welcome you to beautiful Monterey County on California’s central coast.

In late March, Carol, Anissa & Arianna came to Monterey so we could gather sedge roots for our baskets. We went out into the beautiful back country of former Fort Ord on public lands that are now managed by the Bureau of Land Management (BLM). I have a backcountry pass I must apply for each year that allows me to take a vehicle into areas that are normally closed to vehicle traffic. 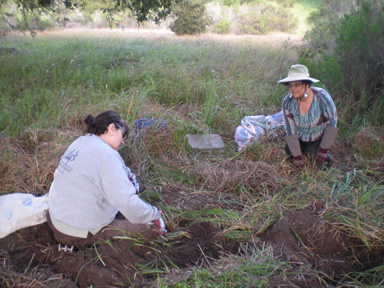 An Ohlone/Esselen friend, Cari, joined us for the day on her very first introduction to the activities involved with traditional basketry. We went to the largest sedge bed we’ve been tending over the past several years at Fort Ord’s BLM lands. I call it “Ishak Xuyxuyta,” the “Big Sedge Place,” because it’s the largest of the sedge beds that we have gathered from.

The reason I call it a sedge “bed” is that the sedge plants (Carex barbarae) spread and propagate themselves by means of underground stems called “rhizomes.” (Although we call them “roots,” they’re not true roots.) Every plant sends out several underground runners, and each one of these eventually sprouts a new plant at its end, thereby spreading out further and further to create an ever-growing bed of plants.

The above is true as long as enough moisture is available to keep the plants healthy. I’ve noticed that the sedges seem to grow beneath the canopies of beautiful Coast Live Oak trees. It’s my theory that the shade from the oaks, the moisture dripping from their long, green, beard-like lichens, and the oak leaves that drop to the ground and decompose into rich mulch are what create the perfect growing conditions for these sedges. Otherwise, this riparian plant would be hard-pressed to survive in the otherwise dry and sandy soil. 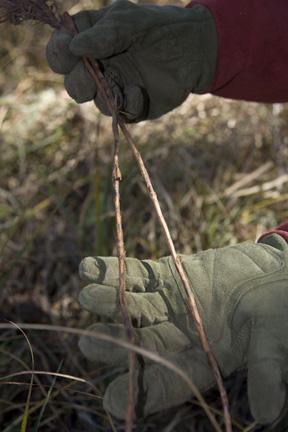 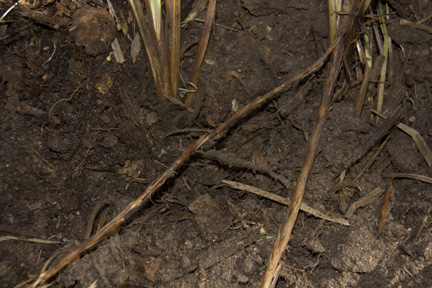 This is what the sedge rhizomes look like & we find them both short, mediium and long in lengh. Photos by Debbie Delatour.

For basketry, we have to dig the runners from the ground by hand and anyone who has done it knows it is no small task. You have to get down and dirty and it helps to have lots of patience. But without the plants our baskets cannot be made, and without the patience to harvest, process and prepare the plant materials you’re out of luck as well. But this is what keeps us in touch with the land and with the ways of our ancestors. This is also why we become such close friends with the plants, without whom our basketry would disappear forever. This is how we learn their ways.

So it was on to the work of the day and we got busy opening up the ground, first with the help of a large garden fork, then down on hands and knees to dig and excavate the sometimes tangled and crisscrossed “roots.” 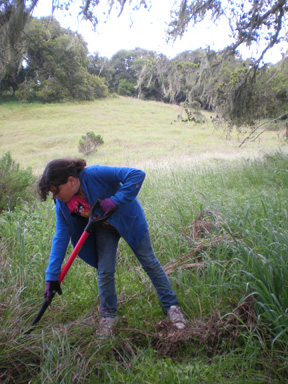 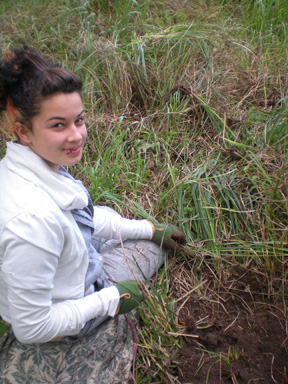 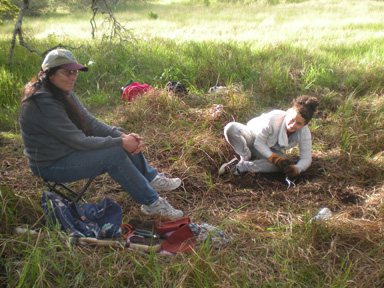 Ari opens the ground with garden fork. • Anissa digs sedge runners with her hands. • Carol looks on, wishing she could dig like she used to before her injury & surgery. Photos by Linda Yamane.

Carol is in almost constant pain due to past surgery on her back that left nerve damage to her foot and leg. Unfortunately, this has affected nearly every aspect of her life, including the ability to gather sedge. Luckily, she has her family to gather materials for her! But at least she can be there with us, and maybe even attract a tick or two.

After two or three hours of gathering, we realized it was getting a little late so we set to the task of closing up the land and giving our thanks. I sang a “Thank You” song in my Rumsien Ohlone language, thanking the sedges and complimenting them, so that they will know we appreciate them and so they’ll continue to want to grow and be healthy, for themselves, for the land, and for the continuity of our basketry. 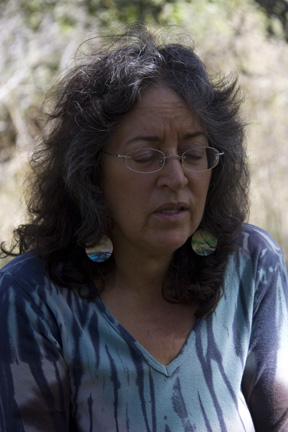 We passed jackrabbits and cottontails on the drive home, and upon returning to my house unpacked the car and headed for the dinner table. We had worked up quite a set of appetites. But after dinner, it was time to split and peel the sedge. 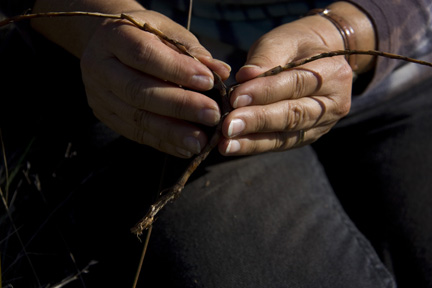 Sedge runners have to be processed soon after harvesting, while there is still plenty of moisture in them. When freshly gathered, they split easily down the center and the bark peels readily. First, each runner is split lengthwise, being careful to keep the split moving as close to center as possible. This is hard to do in the beginning, but with experience it becomes second-nature. This was Cari’s first experience, but she did very well. Just to be sure, though, I thought it would be safer for me to split her longest ones. Why? It’s possible for a novice to reduce a lovely long sedge root into lots of useless little pieces! Carol and Anissa, who’ve both had plenty of practice, were busy splitting and peeling their nice big bundle of sedge, while Ari helped sort the roots. Because she cut her finger last time, we’ve decided it’s not quite time yet for her to use a knife! But there are always plenty of other jobs to do and she’s a great helper (as well as master tree climber!). 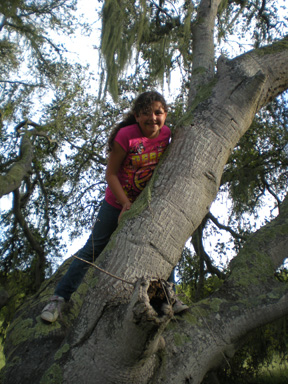 After splitting each sedge runner, we then remove the bark from the two resulting lengths. It seems to me that, in general, processing the sedge after gathering can take approximately the same amount of time as the gathering. Later, after the sedge has dried for about 6 months or more, we’ll need to clean and trim each piece before weaving. Then will come the weaving itself. So you can begin to get an idea of the labor intensiveness of our weaving process.

That’s about if for this entry. I’m getting ready to leave later this week for a trip to London and Paris to visit our baskets in two museums. I’ll be bringing back pictures to share, and hopefully additional knowledge learned from these baskets that left California so long ago.