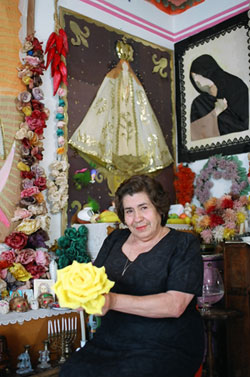 National Heritage Fellowships, the country’s highest honor in the folk and traditional arts.  Twelve fellowships, which include a one-time award of $20,000 each, were presented to honorees from eleven states.  These awardees were chosen for their artistic excellence, cultural authenticity, and contributions to their field.

The Alliance for California Traditional Arts congratulates National Heritage Fellow Herminia Albarrán Romero, a gifted Mexican-American paper artist living in San Francisco, California, who has participated in ACTA’s Apprenticeship Program, ACTA’s Traditional Arts Development Program, and most recently served as a mentor to the Mission Cultural Center for Latino Arts in ACTA’s Folk and Traditional Arts Mentorship Initiative.  Ms. Albarrán Romero practices the art of papel picado (Mexican paper cutting), creating intricately designed paper cuttings and paper flowers that are used on special occasions.  She is also known as an altarista, a creator of altars and offerings that might incorporate paper decorations, personal mementos, and uniquely designed breads.  Recognized as a master artist, her work has been featured in exhibitions at the University of California, Berkeley Art Museum, the Oakland Museum, the Heard Museum, and the Museum of Modern Art.

National Endowment for the Arts Chairman Dana Gioia said, “The NEA’s National Heritage Fellowships honor the individuals who preserve America’s folk and traditional arts. These masterful artists and the cultural legacies they embody are so often overlooked by mainstream media, that it is a special thrill to give them proper recognition.”

This year’s honorees join the ranks of previous Heritage Fellows, including bluesman B.B. King, Irish stepdancer Michael Flatley, cowboy poet Wally McRae and acclaimed performers Shirley Caesar, Doc Watson, and Bill Monroe.  Since 1982, the Endowment has awarded more than 304 National Heritage Fellowships.  Recipients are nominated, often by members of their own communities, and then judged by a panel on the basis of their continuing artistic accomplishments and contributions as practitioners or teachers. Fellows must be citizens or permanent residents of the United States or U.S territory.

The 2005 awardees will go to Washington D.C. in September for a series of events including an awards presentation on Capitol Hill and a concert at Lisner Auditorium at George Washington University on Friday, September 23.