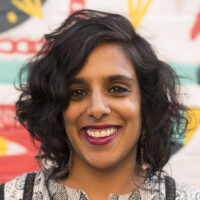 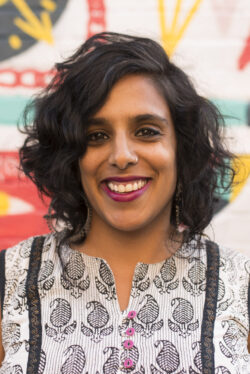 Joti Singh, Co-Artistic Director and Founder of Duniya Dance and Drum Company, is a dance creator and innovator, sprung from the U.S. American south to parents from northern India. She is the Co- Artistic Director of Duniya Dance and Drum Company. Joti began her dance training in Punjabi circles, carrying through her body the culture that’s in her blood and memory. As an adult, West African dance entered Joti’s purview, transforming her body’s imagination. Through this multilingual body, Joti explores where history intertwines with contemporary continuities of celebration and injustice. She created the performance “Half and Halves,” about the Punjabi-Mexican communities of California with collaborator Zenon Barron. She also choreographed for Michael Franti’s “Once A Day” video. Joti has received support from the Creative Work Fund, the San Francisco Arts Commission, California Arts Council, the Alliance for California Traditional Arts, and more. Currently, Joti is creating the piece “Ghadar Geet: Blood and Ink,” about her great grandfather, Bhagwan Singh Gyanee’s role in the Ghadar Party, based in San Francisco in the early 20th century, fighting for India’s independence from Britain.

Joti and her partner, musician Bongo Sidibe, lead bi-annual trips to Guinea and in 2012, opened the Duniya Center for Arts and Education in Conakry. She teaches Bhangra all over the SF Bay Area, including at Dance Mission Theater. Joti founded the World Dance program at the Ruth Asawa San Francisco School of the Arts in 2016. She holds an MA in South Asian Studies from UC Berkeley and a BA in English from Reed College.